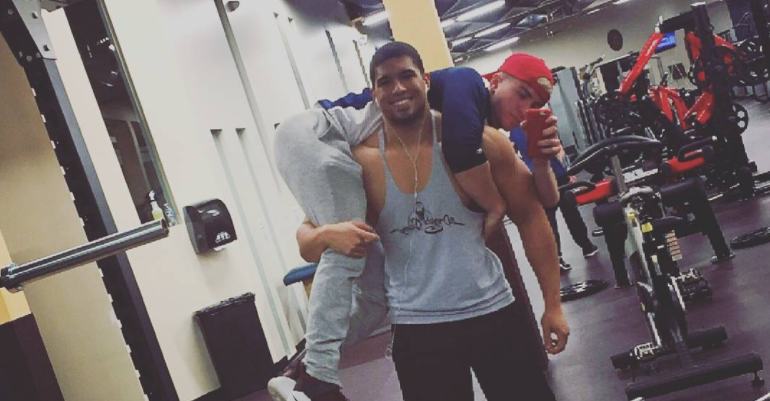 Professional wrestler Anthony Bowens has officially come out as bisexual in a new interview with OutSports, with some help from his adorable boyfriend Michael Pavano.

“It was this past fall and I was three months into a relationship with my boyfriend,” he explained. “Mike and I had uploaded a video to YouTube on his channel called ‘The Laughing Challenge,’ where he described me as his boyfriend.”

Though he enjoyed making the video, Bowens was worried about his teammates potentially finding out his secret, which didn’t take too long because a few weeks after the video was uploaded, he received a text message, reading “Bro why didn’t you tell me?” The two discussed it further, and ultimately his friend told him, “he didn’t care and that I was one of his best friends in the business.”

Not long after that, Anthony took to Facebook to really make it official.

“After hitting send, I immediately turned off my phone. I didn’t want to think about what people would write. After about 30 minutes I told Mike to check his phone. He had the biggest smile on his face, our friends in the room cheered, and I made the decision to turn on my phone. The response was overwhelming positive,” he explained.

Now Anthony doesn’t hesitate to share pictures of him and his boyfriend. In fact, he relishes it.

Who ever said you can't pick up guys at the gym? Lol This was our best attempt of making fun of fitness couples. Happy Valentine's Day @michaelpavano

I'd like to introduce you to my better half @michaelpavano. Give him a #follow, he's kinda cool haha

“I can’t even begin to tell you how many people I’ve spoken to over the years who are hiding and suppressing themselves out of fear of being judged. If I can help inspire at least one person to fight past their struggles through my journey or inspire at least one person to live their dreams, it’s all worth it for me. The journey and the fight is just beginning!” he finished.

We couldn’t have said it better ourselves.